The "Baby-Boomer" Generation—Where it really all began 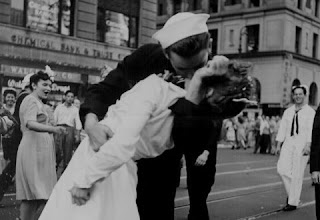 This is one of the most famous photographs ever published by Life magazine—V-J day in Times Square. The picture was taken by Alfred Eisenstaedt, who said he was in Times Square taking candid photos when he spotted a sailor "running along the street grabbing any and every girl in sight," he later explained. "Whether she was a grandmother, stout, thin, old, didn't make any difference. I was running ahead of him with my Leica looking back over my shoulder... Then suddenly, in a flash, I saw something white being grabbed. I turned around and clicked the moment the sailor kissed the nurse."

I've heard the story many times but it wasn't until recently that it really hit home—I now see this day—this moment in time— as the "twinkle in the eye" of the Baby Boomer generation.

My mother, then a 17 year old secretary working at Civil Engineering on 39th street, was one of the girls in that crowd on that exciting day in history. The news hit—the Japanese had surrendered—the war was finally over! She walked to Time Square with several of the girls she was working with and to this day, at 85 years old, when she tells the story you can feel the excitement—the absolute relief and shared exhilaration felt by everyone on the streets of New York. 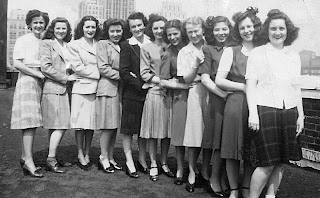 (My mother, Jean Sanatass, third gal from the right, pictured with her coworkers)

The scene took place only a few years before my parents married, and my oldest brother Marc was born—first of the seven Baby Boomers born to my mother and father. 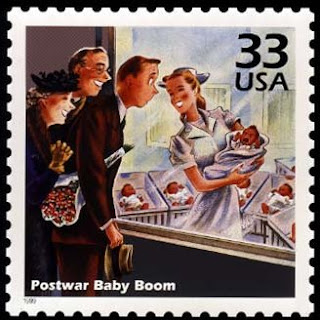 Marc was born at the beginning of the Baby Boom but he was not the first.
It was not until recently that I was aware that there was an official "First Baby Boomer" —the first birth in the tidal wave of births beginning in 1946. Her name is *Kathy Casey Kirsching.

I've thought a lot about our entrance into this world—at that time in history. It was a time of great hope and confidence in our country; the country had come through The Great Depression, a war that lasted six long years, bringing the nation together—through their unified support and the tremendous sacrifice of lives lost.
And now our parents looked to the future with great hope. We were welcomed—we were wanted! I was one of seven children—and that was not unusual.

So this is where it all began—but where did it go? ....just who are the Baby Boomers?

From Wikipedia:There is some disagreement as to the precise beginning and ending dates of the post-war baby boom, but the range most commonly accepted is 1946 to 1964. In the United States alone, approximately 76 million babies were born between those years. In 1946, live births in the U.S. surged from 222,721 in January to 339,499 in October. By the end of the 1940s, about 32 million babies had been born, compared with 24 million in the lean 1930s. In 1954, annual births first topped four million and did not drop below that figure until 1965, when four out of ten Americans were under the age of twenty.[1]

In May 1951, Sylvia F. Porter, a columnist in the New York Post, used the term "Boom" to refer to the phenomenon of increased births in post war America. She said "Take the 3,548,000 babies born in 1950. Bundle them into a batch, bounce them all over the bountiful land that is America. What do you get? Boom. The biggest, boomiest boom ever known in history." [2]
1951...and I was born in that exciting year. Why was it exciting? Because it was a time when our parents believed they could do just about anything! And that belief was contagious....

—we'll talk more about it in the days ahead.

Surrender of Japan—news reel (video)
Posted by Mamie at 8:00 AM No comments: